Meaning of Green by SUSAN HARRIS

Today is St. Patrick’s Day, a celebration of the Irish, and by extension, friends and well-wishers 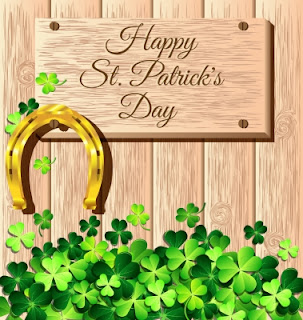 around the globe. The colour green is associated  with St. Patrick’s Day but rather than why they chose green as their colour, I was more interested in the symbolism of green in general. Some facts of green are:

·      Green is a secondary color on the spectrum.
·      Green is formed by combining the primary colours of blue and yellow.
·      Green is the most common color in the physical world, found in nature, in grass, trees, and shrubs.
·      Green is the color of awakening, of renaissance and rebirth. It is the color of spring when everything comes alive, and there is a guarantee that life will go on while things remain green.
·      Green is a color that is stable and enduring, as season after season, green resurrects.
·      Green symbolizes fertility and harmony.
·      Researchers have found bodily benefits to green, such as improving vision since watching green soothes the eyes, and relaxing the body by alleviating stress. People working in green offices have been shown to be more satisfied with their jobs.
·      The green light on the traffic trio equates safety, physically and emotionally.

The association of green traces its roots to Irish political history. Timothy McMahon, Vice President of the American Conference for Irish Studies argues “the earliest use of green for nationalistic reasons was seen during the violent Great Irish Rebellion of 1641, in which displaced Catholic landowners and bishops rebelled against the authority of the English crown, which had established a large plantation in the north of Ireland under King James I in the early 17th century. Military commander Owen Roe O’Neill helped lead the rebellion, and used a green flag with a harp to represent the Confederation of Kilkenny, a group that sought to govern Ireland and kick out the Protestants who had taken control of that land in the north of Ireland. The color green cropped up again during an effort in the 1790s to bring non-sectarian, republican ideas to Ireland, inspired by the American revolution and the French revolution. The main society that promoted this idea, the Society of United Irishmen, wore green, especially an Irish version of the “liberty caps” worn during the French Revolution. One police report described their uniform as comprised of a dark green shirt cloth coat, green and white striped trousers, and a felt hat turned up on one side with a green emblematic cockade.

Though the rest of the uniform eventually faded from popular wear, the importance of the color green spread, thanks in part to the poems and ballads written during this time, most famously “The Wearing of the Green.”"

Thanks Susan. I enjoyed your interesting trivia about the colour green and also the historical background to the Irish association with it.
A peculiar association I have with green is that when I see a bright green white background adjacent to it, it look pink to me. And when I see bright green on TV, say when watching weather news that displays a large green land mass, the flesh tone of a Caucasian weathercaster appears quite red, and a person of colour's skin takes on a rich hue. ~~+~~