-an article for the Engage Light Magazine Christians love CS Lewis for his best-selling Narnia Tales, which have sold over 100 million copies. The Narnia Tales movies have grossed over 1.5 billion dollars worldwide.

Many people however have not connected CS Lewis with science fiction. Before Aslan and the Narnia Tales (1950-1956), there was Elwin Ransom and CS Lewis’ Space Trilogy (1938-1945). Dr. Ransom, a professor of philology (language study) modelled on J.R.R. Tolkien, is the main character of C. S. Lewis’ Out of the Silent Planet, Perelandra and a significant character in That Hideous Strength.

Science fiction, thanks to CGI technological advances, has become the dominant genre of the 21st century.  Just think about the relentless blockbuster films like Starwars and Star Trek, produced by Marvel, Disney, Time Warner, DC, and others.

JRR Tolkien and CS Lewis as close friends challenged each other to write a book on a favorite topic.  While Tolkien chose time travel, Lewis chose space travel. Lewis read 19th century science fiction pioneers like Jules Verne and HG Wells. The type of science fiction that most interested CS Lewis were strange encounters with the other which have moments of beauty, awe, or terror which our actual world does not supply. He called this fantastical literature. Lewis saw space not as a region of cold, terrifying vacuity, but rather as the heavens.

In the final book of the trilogy That Hideous Strength, Lewis poetically envisioned a modern-day tearing down of the Tower of Babel.  He chose the book title from a 1555 poem about the Tower of Babel which had a lengthy ‘shadow of that hyddeous strength’.  It was completed on Christmas Eve in 1943 during one of the darkest periods of WWII. George Orwell, author of 1984, wrote a book review of Hideous Strength, saying that “one could recommend this book unreservedly….Unfortunately, the supernatural keeps breaking in.”

In the final novel, the dark forces that were earlier repulsed by Dr. Ransom from Mars/Malacandra and Venus/Perelandra are gathered for a last assault on planet Earth itself.  It has been called ‘the true return of the Jedi’.  The Hideous Strength alerts us that science, technology, and education can sometimes dehumanize ourselves, our families, and even our marriages.  When we were younger, many of us were taught and believed that science and education would solve all the world’s problems.  Few realized the potential dehumanizing aspects of science and education when they become absolutes, replacing biblical morals.  A modern example of that is the native residential school tragedy, robbing children of family and language.

Lewis described Hideous Strength as a fairy-tale for grownups. He saw a close connection between this novel and his earlier book The Abolition of Man.  Dr Francis Schaeffer noted: ““I strongly urge Christians to read carefully this prophetic piece of science fiction. What Lewis casts as a warning in the form of fantasy and science fiction is much closer today.”

Lewis distinguished between science and the ideology of scientism, what he called scientocracy, the unchecked belief in progress which allows for no ‘wholesome doubt’. Covid anxiety makes us more vulnerable to trusting in technocrats who think that they know best.  Lewis commented: “I dread government in the name of science.  This is how tyrannies come.” Overreach by governments is a prevailing temptation, particularly during pandemics.

The technocrats in Hideous Strength work for a governmental agency entitled N.I.C.E. (National Institute for Controlled Experiments).  When power becomes absolute and totalitarian, then even goodness is sacrificed on the altar of ideology. N.I.C.E. powerfully swallows the sleepy university town of Edgestow, gaining total political and military control of the area. This is the first step into turning England into a police state and eventually world domination. Totalitarianism always hates democracy, freedom of speech and religion.  One wonders to what degree the Big Brother organization of Orwell’s 1984 was influenced by Lewis’ earlier N.I.C.E. concept.

Mark and Jane Studdock, as the protagonists in Hideous Strength, become swallowed by the secular agenda of N.I.C.E.  As a sociologist, Mark is forced to write media propaganda about riots that have not even taken place yet. Mark’s idol is group acceptance at the cost of giving up self.  Jane’s idol is independence at the cost of relationship.  While he feared exclusion, she feared intrusion.  Their marriage is being sacrificed on the altar of work success.  C.S. Lewis also saw independence as the primary obstacle to his eventual conversion: “I had always wanted, above all things, not to be ‘interfered with.’ I had wanted (mad wish) ‘to call my soul my own.’”

The only opposition to this take-over bid is an unlikely tiny group led by Ransom at St. Anne’s manor house. After having remarkable accurate disturbing dreams about a decapitated scientist Alcasan, Jane ends up visiting Dr. Ransom’ group at St. Anne’s. Having discovered a way to keep Alcasan’s head alive, N.I.C.E. sees this as a true resurrection and the scientific way to have eternal life. Its ultimate aim is to free humanity from nature itself. Organic matter is seen as dirty and unnecessary. N.I.C.E. aims to transform humanity into ‘the most efficient animal’, by ridding us of all ‘our rivals on this planet’: insects, bacteria, animals, and plants.  Everything else is to be scientifically sterilized. NICE’s real agenda was a war on nature. They had a particular hatred for trees as unhygienic:

At present, I allow, we must have forests, for the atmosphere. Presently we find a chemical substitute. And then, why any natural trees? I foresee nothing but the art tree all over the earth. In fact, we clean the planet … And why not? It is simple hygiene.

Absolute power in the hand of the elites easily becomes deified and systemically entrenched.  The Kingdom of God, according to N.I.C.E, is to be realized through technology, turning humans into supermen and superwomen: “The Son of Man -that is, Man himself, full grown -has power to judge the world – to distribute life without end, and punishment without end.”

The wild card in this story is the reappearance of Merlin from King Arthur days.  N.I.C.E. tries to capture Merlin in order to harness his supernatural abilities, but instead kidnap an unsuspecting homeless tramp. The real Merlin joins force with Dr. Ransom’s team, seeking to rescue and rehumanize Mark Studdock.

Covid anxiety can dehumanize us. The Kingdom of God makes us more human, more Christ-like.  Lewis knew that we all long, perhaps unknowingly, for the Kingdom of God, for what he later called Narnia.  Imagine the missionary impact if just like the Narnia Tales, the Space Trilogy made it into film.  Will you pray with us for that future miracle? 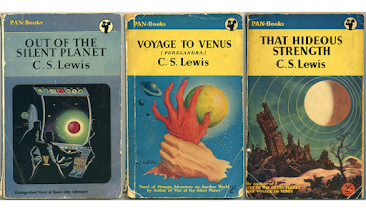 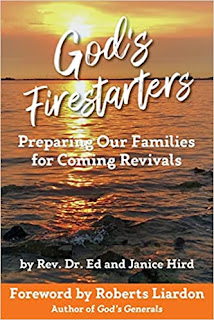 A Dot on the Horizon by Rose McCormick Brandon

Cast your bread upon the waters and you will find it after many days. Ecclesiastes 11:1

A woman raised her children to love the Lord. She taught them the scriptures, prayed with them and for them each day. Every Sunday she took them to church. One of the children decided Mom’s religion wasn’t for her. She wasn’t going to spend her life reading the Bible and praying to a God who may or may not be listening. She wanted freedom. When she left home, the daughter made a new life that didn’t include church or her mother’ faith.

Years after the mother passed away the daughter quietly turned her life over to Jesus. She opened her Bible again and began to pray. She experienced the love of Jesus in a way she never had as a child.

Our work for Christ, including the raising of children, is like bread cast into a river. Like ships our works sail away from us. And disappear. We watch for signs of their return. Time passes. One day a dot appears on the horizon. Our little ship returns to port.

The Passion Translation of Proverbs 22:6 reads: “Dedicate your children to God and point them in the way that they should go and the values they’ve learned from you will be with them for life.” The emphasis is not on the children sticking with godly teaching but on the godly teaching sticking with them. A subtle but profound difference.

“He is the faithful God, keeping his covenant of love to a thousand generations of those who love him and keep his commandments” (Deuteronomy 7:9).

After death, the influence of the godly remains intact and undiminished. The power of their lives is as fresh and fruitful as the trees and palms which shadow their graves. Lawrence Ramsay

Cast your bread upon God's waters. In His time it shall return to you with joy.