This past month has served as a reminder where our comforts lay and who our supporters are. When we received news of a death in our family, we were in shock, as many would be at an unexpected passing of a younger sibling.

For myself, it was hard to believe that my brother had died. It was head knowledge only, at first. I could say the words to someone else, but the news had not yet reached my heart and thereby my emotions. For those first weeks — and there were weeks until the interment of his ashes — just because of distance and practical matters.

I kept expecting he’d come on Messenger and write, “Hi, sis, how are you doing?” Because apart from his visits home, that’s how we communicated. For him, it was less expensive; and for me, practical because of work, family and time commitments. We could communicate as we were able. And he’d share the news there when he was coming to Ontario to visit.

Initially all I could do was share a few small stories about our adopted brother who came at 5 ½ years old, insecure, energetic and eager for a Mom and Dad to call his own. In the deal, he got five big sisters. He grew through childhood, expending much energy both in school and on the farm where he was growing up. Through teenage years, that growth continued with some of the typical teenage issues, though multiplied. At one point, he met his birth mom and several siblings from that family. Then as an adult, grew to 6 foot something. He’d lean on my shoulder and tease that I was now his little sister. We had a good relationship.

On sharing the fact of his death, friends, extended family, and members of my church family shared their condolences, and on the day of my brother’s celebration of life, we were surrounded physically by cousins on both sides of our family. Also in attendance were neighbours from the farm and town, as well as friends.

We were blessed with sunshine and fair weather, so we could gather outdoors a little longer after the graveside ceremony, and those who felt comfortable to go indoors for a lunch joined us there as well.

The comfort came not only in gifts of flowers, plants, and sympathy cards, but also the prayers of people around us. The minister who officiated shared words from the 23rd Psalm — read by one of my nieces — often used on such occasions. “Yeah though I walk through the valley of the shadow of death, ... for you are with me.”

We often have to hold onto those promises when we are in that place. God loved my brother as he loves us all. My reading from 1 Corinthians 13, about love in action, reminded me of him too. He may not have often said, “I love you,” but he acted instead, most notably by calling Mom and Dad whenever he could on their birthdays, anniversary and Christmas when he could not be home. And he was home for their celebrations of life too.

I hope that your comfort lay there, and that you too will be surrounded by the company of friends and family who care about you and how you’re doing in tough times. Paul’s words in 2 Corinthians 1:4 reads: that God “… consoles us in all our affliction, so that we may be able to console those who are in affliction with the consolation we ourselves are consoled by God.”

-an article published in the Engage Light Magazine 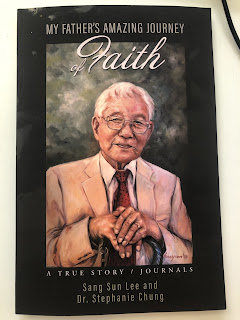 One of the greatest missions miracles in the last hundred years has been the millions of Koreans that have been swept into the Kingdom in Korea, Canada, and around the world.  Korea, along with Brazil and USA, now have the highest percentage ofmissionaries sent around the world.

The earliest missionaries to Korea died faithfully as they were being decapitated. Often the people killing them turned to Christ, and shared the gospel of forgiveness with their fellow Koreans.  Pyongyang, North Korea, before the communist takeover, was known as the Jerusalem of Asia. Billy Graham’s wife Ruth attended one of the well-respected Christian schools in the capital city of Pyongyang.

Sang Sun Lee was one of many North Koreans who were forced to flee to South Korea during the Korean War.  Sang Sun prayed, “Please let me escape to the South, and if you let me live, I will build churches.”  During the war, he was lined up with four others to be shot, one by one. Just as he was to be shot, someone cried out, ‘Turn his pockets inside out and see what’s in there.’ Miraculously his life was spared.

The North Koreans, who had to leave everything behind, brought the gospel to many South Koreans. Sang Sun had no money for food, and no place to stay.  He became a street vendor and then shop owner in Suwon City, South Korea.  With the help of nine other North Korean refugees, they planted the first church in Suwon.

Often families became painfully separated during this exodus.  Sang Sun Lee did not even recognize his wife and three children when they were finally smuggled across the border. In Dr. Stephanie Chung’s new book My Father’s Amazing Journey of Faith, Sang Sun stated:

One day, I caught sight of a homeless-looking woman wandering near my store.  She was carrying her belongings on her head, had a baby on her back, and her two hands held one child each…As she approached me, my heart stopped.

In order to pay for smuggling his daughter-in-law and grandchildren to the south, Sang Sung’s father had sold his entire apple orchard. Sadly, Sang Sun’s wife died within the first year of her liberation. He falsely blamed himself for his wife’ death.  One day, a Christian woman from Pyeongtaek turned up at his home, and said to his three children, “Starting today, I will be married into this house and become your mother!” As a strong Christian from a non-christian home, she was determined to only marry a Christian man.  She had heard the voice of God telling her: “Get married into that household (of the widower) and become a mother to those three children.” Because Sang Sun could not get rid of her, he finally said: “If your parents give you permission, I will think about it.” The woman’s father turned up, saying that he hated Christians, but in a dream, his older brother told him to give his daughter in marriage to the widower. So they got married, having another three children.

God gave Sang Sun unusual favour in first manufacturing long johns.  This enabled him to sow a lot of finances into the North Korean refugees and help start many new churches.  He gave his workers Sundays off, many of whom started attending church: “I vowed to treat (my workers) as I would like to treat God, for the workers were sent from God.”

Even after being forced to declare bankruptcy because of his radical generosity to creditors, God opened new doors and favour.  After his factory closed, he turned this apparent defeat over to the Lord:

All I did was empty my heart and ‘lay it down.’…I felt my spiritual eyes open. The joy that came to me was overwhelming, and I could hardly contain that joy.

Unexpectedly, he was asked to produce the inside fabric forrubber boots, something that was invaluable in those muddy, wet Korean days before asphalt roads.  Sang Sun never let success and wealth go to his head. Instead, he increased his relentless generosity, by helping many North Korean refugees and planting many more churches.  The key for him was surrender to the Lord:

I said to myself that there was nothing I could do by myself.  Everything is done by the Lord, whom I love. Everything…I had to die completely, let God live within me, and let him do his thing.

Despite the attacks on his life and many struggles, Sang Sun lived until age 108. His daughter Dr. Stephanie Chung remembers her dad as warm, faithful, and sincere, her role model, and the root of her growing faith in God.  Sang Sun was “a true witness to God’s control of our lives”.  He never forgot his pledges to God, even through great hardship. Sang Sun sowed faithfully into God’s Kingdom, reaping countless changed lives in Korea, Canada, and throughout the world.