For years it did not matter when Thanksgiving took place. Living in North York and Calgary, even on the small-town prairies, celebrating Thanksgiving was not about its origin. As a Christian, it is desirable for me to give thanks, so the official holiday season was welcomed with all the ardour and trimmings of the festivity – colourful decor, mouth-watering food, great company. But this perspective changed in the last few years when I married into a farming family, more specifically, to a farmer. Now my eyes were truly opened to the underlying reason for celebrating Thanksgiving– to give thanks for prosperity and a fruitful harvest. Literally bringing to the storehouse (church) the physical produce of the land. 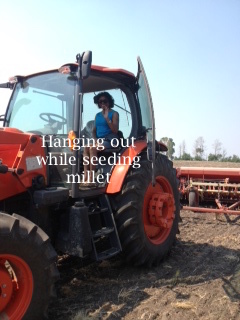 Each time I drive on grid roads, mud trails and highways that bound our fields, I breathe prayers for God’s blessings on the land. Each time I stand on the soil as it was cultivated, seeded, harrowed, land-rolled, sprayed, swathed and combined, I thanked God for what He entrusted to us. Each time I checked for green or took grain to determine moisture content, I thanked our Father for the perfection of the harvest that would reaped. Each time the much-needed rain failed to fall I reminded my husband of the dews of Mt. Hermon that rose from the earth to water the land. “God can water  the earth from below. We need to thank Him by faith.” was a quiet reassurance as I gazed at the parched land. Then when the rains fell a bit too much and threatened the ripening, it took intention to thank God for the promise, to not be ungrateful.

Each time I prepared a meal, or transported others from field to field, or stood by while repairs were done, or picked up parts, or rode the equipment, accompanied to sales or other occasion, I’ve invited God in the process. I only do simple, non-laborious things on the farm. My role is intermittent cook, encourager and pray-er, “thanker” for the things asked by faith, giving gratitude for the things we’ve prayed for but which we have not yet seen (also finding homes for the cats). 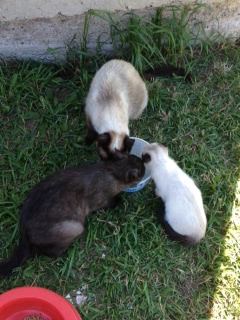 And so in the last few years I’ve become convinced that if Thanksgiving is a celebration for the harvest, then it observed too early in the year. We have never finished harvesting by the second Monday of October. History records that Thanksgiving was once celebrated in late October or early November but it was changed to its current date because of Remembrance Day. Those dates would have worked just fine.

This year - when the harvesting team representing five families could not be in their homes to celebrate Thanksgiving because we were in our fields feverish to get the flax reaped, and a number of other farmers were in their respective fields - my husband and I acknowledged that the US had got the date for Thanksgiving right. We decided that we would celebrate on their date (and posted it on Facebook), for by then the crops would be in the bins and we’d have the bounty. 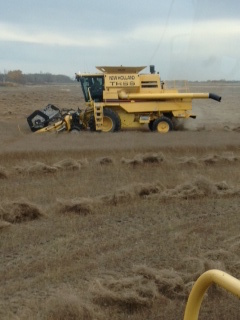 Not that we need an occasion for giving thanks. It has become a moment-by-moment lifestyle, one that is far more potent than a traditional observance. I draw from Jesus on the road to Emmaus with the “two of them” . In Luke 24, Cleopas and his friend were in Jesus’ company, the three walking to the village and talking about the works of Jesus, His burial and resurrection, and the Scriptural fulfillment. Although the men had lively conversations and were excited in their spirits by the discussion and fellowship, they did not recognize Jesus.  When they invited Him to eat supper with them, Jesus took the bread, gave thanks, broke it and distributed it.

And the lights came on for the men…

Perhaps they had sat in the crowd when Jesus took five loaves and two fishes, gave thanks, broke it and handed it to his disciples to distribute. Maybe they had heard that at the Passover He took the bread, gave thanks, broke it and gave the disciples to eat. The same with the cup – He gave thanks and they drank, attaching the spiritual symbolism of the sacraments to the bread and the drink. Maybe they had witnessed, or heard, that Jesus had stood at the tomb of Lazarus and gave thanks then called the dead man’s name and he lived. Or that He commended the leper who returned to give thanks… 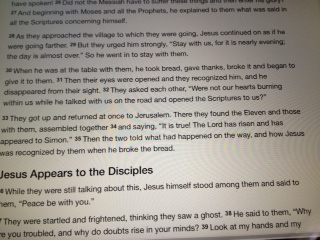 Now here was the stranger, taking the supper bread and giving thanks, breaking it and handing them each a piece. GIVING SIMPLE THANKS.

“When he was at the table with them, he took bread, gave thanks, broke it and began to give it to them. Then their eyes were opened and they recognized him, and he disappeared from their sight.” (Luke 24: 30-31 NIV)

If I had to create a trademark for Jesus it would be “Giving Thanks”.  He gave thanks in the simple and it became the miraculous complex. He did not wait for a certain day or for the masses. He gave thanks before the thousands, the twelve, the two at Emmaus. In the open air, at the graveside, in private rooms. It was His lifestyle, and one that I strive to emulate and imitate.  I invite Him in the business. Partner with Him in the fields. Not only when its harvest but when the land lay blanketed and bare under white, in dormancy before the next seeding period. And throughout the agricultural season.

I want thanksgiving to flow from my mouth moment by moment, for gratitude to be my identifier, whether I cook the turkey in October or November, or never. I desire to be a giver of thanks. I want to be known as belonging to God by my lifestyle of thanksgiving, being grateful for the simple things. A thankful heart is grateful heart, and I am forever grateful to God.

Mark me. Brand me, Lord. Amen.

A lovely Thanksgiving and gratitude post, Susan. Hmm, I'd no idea that you were now a 'farm girl.' That's great. (And I like your drawing on our Lord's example of living in a spirit of thanksgiving.)
I get your point of preference for a later date for Thanksgiving in relation to getting your crop harvest completed; it's certainly understandable from that perspective. I do like the fact, though, that the present earlier date provides a longer period between it and Christmas and New Year. I suspect that for me the preference is also subconsciously reinforced because Halloween hoopla comes bombastically charging in between those points on the calendar. Thanks Susan.~~+~~

Thanks, Susan, for honestly sharing some heartfelt thoughts about Thanksgiving. I think the biggest reminder from your post is that we need to give thanks every day regardless of date or turkey offering. And yes, how important it is for us to belong to God and having a lifestyle of gratitude. Good post. Thanks.

They describe me as a "city girl", Peter. I've tried to pass of as one but I guess farm girls are the ones born there or who dress in a certain manner :-). I chuckle at your preference for it reinforces the convenience that Thanksgiving has become and makes obvious the dissociation from harvest and the reason for its origin. Yes, Glynis, that is honestly how we live.