What Are You Doing?

For a few years now, I have spent twenty minutes in the morning trying to listen to what God has to say to me. Yet He often remains silent.

One Monday morning not long ago, I said to Him, “If I can’t hear You, could you at least show me what You are doing?” Then, reaching for my phone to set the timer I noticed a text from our son, in Toronto. Texts from him early in the morning are unusual. 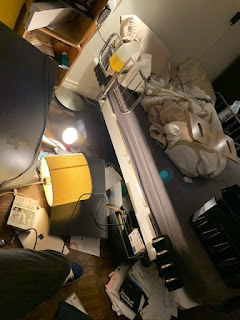 It included a photo. The text read, “I need help urgently. My wheelchair is broken in two places and it will take at least several days to get parts. In the meantime, I’m bed-bound. Also, my desk fell over.” The photo showed the chaos of his room.

I ran to the bedroom and showed Glen, my husband. His solution was John’s old manual wheelchair in our storage cupboard in the basement. We ferreted it out and threw it in the car. Texting John to let him know we were coming; the next hurdle was to arrange the repairs our car needed before it was safe to travel.

A week earlier, Glen made an appointment to bring the car in that day for the repairs, as it was a particularly busy time. Learning of our plight, the garage owner rescheduled the repairs and put our car first on the list. While it was being repaired, Glen went to the office in a courtesy car to fetch files he needed for an important meeting online the next day.

By mid-morning we were on the highway and were in Toronto by 4:30 Monday afternoon. Pulling the old wheelchair out of the car, we discovered the pin that holds the right wheel on to the chair was missing. 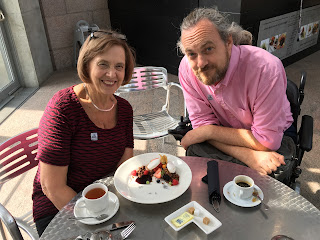 Only one place in Toronto provides wheelchair repairs and many of our experiences with them over the past twenty years, since John’s accident have been negative. The company has changed hands several times but never seems to be able to deal with all of the demands. Without other options we had to call them. 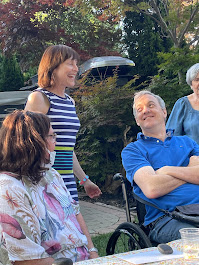 Checking their number on line, we found out the service department was closing in five minutes. John risked spending another day in bed, increasing the possibility of bedsores that take months to heal.

However, when John pressed the key to check their hours, a voice asked what help he needed. He explained about the pin and the person on the line said she would check their warehouse to see if they had one. A short while later, she called to report she had not found the pin, but was going to check with her manager. He might know if they had one. Soon she called back again to say they found the pin. We could bring the chair at noon on Tuesday to make sure it would fit.

When we went to the shop Tuesday, we also brought the chair that had broken. John had made an appointment for them to come and pick it up from his place on Thursday, since he obviously could not bring it in. If we brought it Tuesday, it could be repaired sooner.

The pin fit perfectly and although the tires were bald and the rims needed replacing, the old chair was quickly made functional. If they could find another set of wheels in the warehouse, they would bring them with the repaired chair to John’s place Thursday.

However, while we were waiting for all the paperwork to be done for the old chair, the supervisor came into the room and said to us. “Well, we have a miracle here. We were able to repair this chair as well. There was the broken chair, fixed and ready to go.” We were overjoyed, and loading the two functioning chairs in the car we headed back to John’s place. 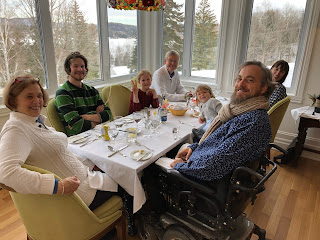 As we drove back, I marveled with Glen about all that we had seen. To me it was evidence of how God is caring for our son and thereby showing us His love. He knows the concerns of our hearts and responds to them. I heard His love.