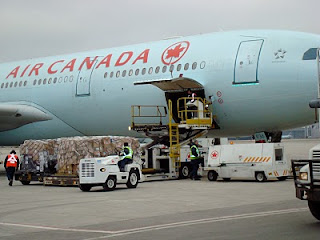 Every Friday in my regular early morning prayer time, I pray for several countries specifically. One of them is Haiti. On the morning of January 8th, I felt particularly burdened as I prayed for that country. Usually, I use the Scriptures as a guide when I pray. That Friday morning, as I prayed for Haiti the verse that I read was from Acts 4. The Contemporary English Version says in verse 30, “Show your mighty power, as we heal people and work miracles and wonders in the name of your holy Servant Jesus.” I found it a beautiful image but had no idea how significant it would be just a few days later, after the earthquake hit on Tuesday, January 12th.

Does that mean that I think God orchestrated the earthquake that caused so much pain, suffering and grief for the people of Haiti, so that these gracious deeds could be done? No. I do not understand what the cause and effect relationship is between disasters and the will of God. What I do know is that whenever and wherever on this earth disasters occur, God is there listening to the cries of the suffering and bringing hope and healing through all kinds of people. My heart broke every time I turned on the news and saw the desolation in Haiti.

I saw a photo of the caved in roof of the house where we stayed when we were there in 2006. I have also seen God’s mighty power at work in incredible ways. Just this morning, I read in the Montreal Gazette about a man who tunneled his way out of where he was buried under debris, twelve days after the earthquake. He managed to find food until the last three days. He avows that God kept him alive.

The cynic may well ask if God did it for him, why He did not do it for others. Of course, I cannot answer that. Only God knows. However, that does not mean that the man is wrong in giving praise and thanks to God for sparing his life.

Such tragedies put us in touch once again with the essential realities of life. It is not what we have that matters, but where our hope lies.

This weekend my husband, Glen, was on an Air Canada flight that took medicines and supplies as well as volunteer medical personnel to Haiti to try to help in the mammoth relief effort that is taking place. The project was organized by Air Canada and employees who participated did so voluntarily, without being paid. The plane returned early Sunday morning, bringing the first of the Haitian orphans to Canada. Sitting next to Glen, on the way to Haiti was Father Raymond De Souza. One of his tasks was to pray for the mission.

As the flight prepared to leave Canada, the priest reflected and based his prayer on the words from Matthew 25 – how meeting the needs of those in desperate straits is ministering to Jesus. For the return flight, when the twenty-four orphans and Haitian evacuees were on board, his focus was James 1:27, “Religion that is pure and undefiled before God the Father is this: to care for orphans and widows in their distress, and to keep oneself unstained by the world.”

I mentioned in an earlier blog, how I always pray as I enter an airplane because of my fear of flying. However, I have never heard prayer offered over the public address system on a flight. But then, I have never flown as mission like that one. To me it is an example of the mighty power of God being shown in healing and working miracles and wonders in the name of our holy Servant Jesus. I believe that out of all the pain, suffering and devastation a new Haiti will emerge that will remind us where hope is found.

When I read the story of Father De Souza’a prayer on line this morning, I discovered that there were those who commented negatively about it. How sad I felt as I read their remarks. Then my husband reminded me that they have possibly not yet come into the light. They are not aware of what God is doing.

I saw a related CTV news item last night. As a reporter was passing a church service being held outside the collapsed church building in Port-au-Princes, he was called to the microphone by the pastor. The CTV reporter was able to tell the congregation that there were people throughout the world who were contributing aid to help in the terrible tragedy that has befallen their country. They had no idea people outside Haiti knew or cared. Yet, God is at work on their behalf and knowing that they sing with joy.

Eleanor, your compassionate warmth comes through in this account, in the voice that I've come to associate with God's ministry call on your life.
Thank you.

Thank you Eleanor for this very encouraging report.

Eleanor, what beautiful words supporting the truth and magnificence of God. Thank you for keeping us informed and encouraged in the Word. No, we do not understand matters such as this earthquake but without sadness there would be no joy. May the compassion continue and may the good come soon and may we continue to see God glorified!