Gowns, Growing Up and Newton's Law by SUSAN HARRIS

Three days ago we celebrated Mother’s Day. My first such day welcomed me with an 11-day old baby, helpless and loud. This one,  with an 18 year-16-day old teen, assured, but still loud.

Both these mother’s days serve as the bookends of my responsibility in the role of equipping her for life on her own. I feel satisfied that I’ve done my part, and the ensuing years are a bonus for us. My daughter is now an adult and I care as much as the first day I held her, though now I’ve distanced myself from the goings on of her everyday life. No more censoring of books and movies. No more urging to hand in assignments. No more checking the browsing history.

No more shopping – except for the graduation gown. Her confidence in my taste remains intact. For hair colour too. The texts and calls come fast and furious on varied subjects.

I disclaim any expertise in Physics (unlike her who passed it well, I did not.) When the law came to mind, what caught my attention was “pair of forces”, and it was not physical connection. I can think of many pairs…good and evil, night and day, infancy and adulthood, and a fine set in Ecclesiastes 3.

To me, the most obvious pair is God and the Devil.  Spiritual forces that run counter to each other. As God moves, so does the Devil. Sometimes in imitation (the Devil of God, that is), other times in direct contradiction in the opposite direction. Not that Newton was heeding the spirit or the imitation.

Letting go is agonizing. Yet strangely, I find relief in my new-found freedom, in being child-free and carefree. Perhaps it’s because  the physical parting took place last summer and I’ve had time to adjust. Maybe it’s my own selfishness, being able to do as I like when I like.  Maybe it’s the new home in God’s wide open land where her prints have not been made and there is no reminder of her room.  Maybe it’s the texts and calls that come fast and furious, indicators that distance does not define or sever relationship.

The no-mores juxtapose the many alternatives that lie before me.  These alternatives have the potential to bring fulfillment and grace similar to what the “no-mores” brought. Grace for both His children, she and I. God always compensates, always has a redeeming factor. Be it for sin, for good marks in physics or for graciously blending childhood into adulthood. Always when seasons change.

So many no-mores. And so many alternatives. One can look back wistfully or one can look forward in anticipation. Graduation looms and she will be gowned in our mutual pick. The hair I’ll see then.


I think I like this growing-up-into-adult-and-going-onward stage for I am assured which “force” works for us.

SUSAN HARRIS is officially child-free but will continue writing for children. Her newest release, the ABCs of Compassion/L'ABC de la compassion, is releasing on May 25. It is a bi-lingual book and a joint publication with École St. Henry's Jr. School. 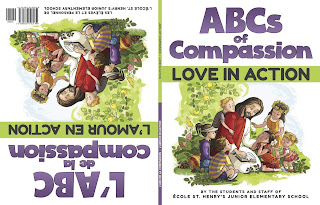 This has been an extra-special Mother's Day for you, for sure, Susan. Hmm, evidently, not only did your emotions run deep at this significant point in your mother-daughter relationship, but also your thoughts. Thank you for sharing them, and also for shring the lovely picture of you lovely ladies! ~~+~~

Congrats Susan, on this next big step for both you and your daughter.

Thanks for your kind words, Peter, we travelled so much over the 18 years, Peter, and experienced so much together. I was at home with her for about 13 of her years. Thanks also, David, maybe you will meet her one day.

I feel like I just enjoyed a fashion show. Beautiful gowns. Beautiful reminiscing. I am always in awe at that shift from child to friend. You will always be her momma and your daughter know that, but when you can share in the grownup things, how wonderful that is. It's a sense of freedom from a stage, but also another commitment as a best friend! I cherish mine!

Your words are so refreshing, Glynis, and your mother's heart speaks to mine. I treasure your words of wisdom re the growing up stage. Gown shopping was so much fun too :-). God bless you and your daughter, you sweet encourager, you.