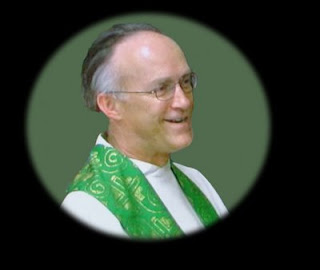 by the Rev. Ed Hird
One year ago, on May 1st, I sensed that I was to once again visit every home in Maplewood and Deep Cove in North Vancouver BC. Thirty-two hundred homes later, it seemed time to visit the connecting community of Dollarton. While in Dollarton, I met my good friend Keith Cameron who lives in the historic Dollar Mill Office built in 1918. Keith pulled out the book ‘Echoes Across the Inlet’ published by the Deep Cove and Area Heritage Association, and said to me: “You need to write an article about Captain Robert Dollar. He was a sparkplug for this whole area”.

For many years, the Dollarton Shopping Centre on Dollarton Highway and Dollar Road was the only food-shopping option. The more that I have learned about Robert Dollar, the more fascinating I find his life-story. Captain Robert Dollar (originally spelt Dolour) was the founder of Dollarton and its first major employer with hundreds of local residents working at the Dollar Mill. He was a very visionary individual who could see North Vancouver’s potential in terms of international trade and commerce.

Coming to Canada penniless from Falkirk in Scotland, Robert Dollar became one of Scotland’s fifty wealthiest individuals, amassing a fortune of over forty million dollars. Leaving school at age 12 to work in Canadian logging camps, he saved up enough cash to buy into the lumber trade itself. As most loggers spoke French, Dollar taught himself French and took over the camp’s accounting. At their peak, Dollar’s mills produced fifteen million board of lumber. As mentioned in ‘Echoes Across the Inlet’, even in the lumber camps, Dollar ‘always made it a practice on Sunday to take out (his) Bible to a quiet place and read it, even in the coldest of weather.” Dollar “attributed much of his success to the teachings received from this daily 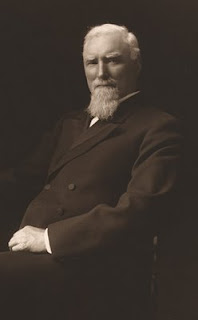 In 1895, Dollar purchased his first ship in order to move his lumber down to American markets. His first boat became a huge success because of the number of people making their way to the Alaska Gold Rush. Out of this, he began the 40-vessel Dollar Steamship Company (later becoming American President Lines). Known as the Grand Old Man of the Pacific, Dollar started three head offices in North Vancouver, San Francisco and Shanghai. Dollar’s ships bore the famous "$" on their smokestacks. During his lifetime he made some 30 voyages to Asia, being the first to bring North American lumber to Asia. While in China, Dollar built a Y.M.C.A., an orphanage, a school for the blind and a village school.
In 1923 at age 80, Dollar purchased seven “president” ships from the U.S. government which enabled him to pioneer round-the-world passenger service, being the first to publish scheduled departure and arrival times. In 1925, Dollar Line acquired the Pacific Mail Steamship Company and its trans-Pacific routes. Dollar was on the cover of the March 19th, 1928 Time magazine, and written up in the Saturday Evening Post in1929. Dollar was a family man with a strong work ethic and solid faith. His granddaughter remembers visiting her grandpa, saying: "We all arose at 6 a.m. and went to bed at 9 p.m. Grandfather read a passage from the bible each morning and we joined in...Grandfather sat at the end of the table and said grace before each meal. At festive occasions he would tell us a story about his life in the Canadian north woods and have us all spellbound and laughing."
Dollar’s mom died when he was nine; his grief-stricken father became an alcoholic. Out of his family pain, Dollar developed four principles to which he clung to: 1. Do not cheat. 2. Do not be lazy. 3. Do not abuse. 4. Do not drink.
In Dollar’s 1920 diary, he wrote: 'Thank God, from whom all blessings flow ...we start the year 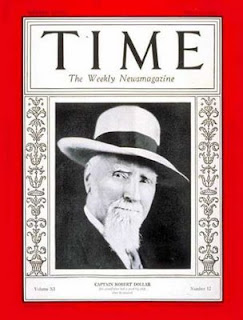 with supreme confidence in the future, knowing that God is with us and hoping prosperity will enable us to aid humanity with our money, and that we will be permitted to leave the world a little better than we found it."
Dollar never retired, saying: "It would have been nothing short of a crime for me to have retired when I reached the age of sixty, because I have accomplished far more the last twenty years of my life than I did before I reached my sixtieth birthday ... I was put in this world for a purpose and that was not to loaf and spend my time in so-called pleasure ... I was eighty years old when I thought out the practicability of starting a passenger steamship line of eight steamers to run around the world in one direction ... I hope to continue working to my last day on earth and wake up the next morning in the other world."
Robert Dollar died of bronchial pneumonia in 1932, at the age of 88. Some of his final words were: “In this world all we leave behind us that is worth anything is that we can be well regarded and spoken of after we are gone, and that we can say that we left the world just a little better than we found it. If we can’t accomplish these two things then life, according to my view, has been a failure. Many people erroneously speak of a man when he is gone as having left so much money. That, according to my view, amounts to very little.”
May the example of Dollarton’s Robert Dollar inspire all those reading this article to make a difference in our lives.
The Reverend Ed Hird
Rector, St. Simon’s Church North Vancouver, BC
Anglican Coalition in Canada
http://www3.telus.net/st_simons/cr0906.html
-previously published in the June 2009 Deep Cove Crier
Posted by Ed Hird+ at 5/12/2009 11:10:00 am

Dear Ed,
Thank you for this inspiring and thought-provoking story. I found it fascinating.
Blessings,
Eleanor

Thank you, Eleanor, for your encouraging words.