Accountability, and Working From Home BY SUSAN HARRIS


After the first smile I began to ponder on the short-sightedness of the statement. It is myopic indeed.

Clothes aside, working from home can bring out one's best self, or it can be the passport to glassy-eyed oblivion. The home office is as distracting (if not more) than the workplace; a main difference, however, is that co-workers wear more vogue outfits than the cat.

I’ve been successful in both the workplace and the home office. (I actually work longer hours at home since elastic waist pants can be pulled up in a second, whereas the grooming for the workplace required an hour. And the commute is only 25 steps.)

My work ethic does not change with location, and therein lies the premise to being my best self.  I have cultivated a sense of discipline. I hold myself accountable. I know how I spend my minutes.

That’s not to say that there aren’t days when I wonder where’s the productivity.  The microwave flashing 1:00 p.m. in blue has prompted me on several occasions to ask what have I to show for the past  six hours.

But I know what I’ve done. It’s productivity that’s the back end, diligence that may disclose the fruit in two weeks, or 10 months, or longer. But it’s never wasted time.

For two years now I’ve kept a loose form of the bullet journal using plain lined notebooks. (I buy cheap ones.)  I was always a list-person, but I used throw out my lists every night. Now my bullet notebook holds my to-do lists; my upcoming appointments and schedules up to a year; significant occurrences; insights, and reflections of the spirit. All captured in point form, terse sentences, or short stanzas.

Last week my husband took two days off. After a full morning of phone calls and emails, I had no real output to show. “If I didn’t have this notebook with the evidence, come next week I’d wonder how I had passed the days.” I observed to him.

When he turned on football on television, that became my social media slot. I jotted the time we spent watching movies, and playing Scrabble. The hours of just talking across coffee or dinner, investing in our relationship. Because it’s written, I know. On days when the optics do not show that progress has been made, my bullet notebook  tells me the truth. When colour coded, at a glance the journal indicates where I’ve  spent the most time. Then I can re-evaluate if necessary.

Behaviour must sync with the dynamism of fleeting time. Time swallowed up in eternity gone. I’ve learned that in being accountable for my minutes, I am being a good steward. Just as Jesus told in the parable that we should be. 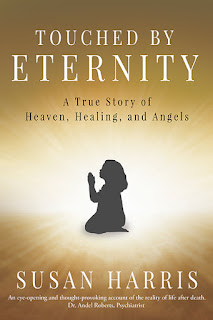 The underpinning premise is to create a system  to hold oneself accountable. The bullet notebook has become my reliance.

A tracking mechanism of any kind can do the same job – digital or paper. I prefer paper. And pants.

Susan Harris is an author, speaker, and television host of ETERNITY.
Visit her website at https://www.susanharris.ca
Posted by Susan Harris at 1/17/2020 03:30:00 am

Hmm, you shame me, Susan. I've done limited journaling in fits and starts, but while disciplining myself to do what I have to do and what falls to me, I have an underlying 'begrudgement' against investing the time to write about it. Of course right now, I'm trying to regain a good functional level of handwriting and typing, as well as piano and other instrumental playing (my right arm and hand look quite normal but have neurological and 'mechanical' impairment). Things are improving, for which I thank God. ~~+~~

O Peter...you are back. Praise God for the healing you've experienced that allows you to do the things you do. You are the ultimate encourager, Peter, and the blog site would not be what it is without you. You are the one person that I am sure reads every blog. What a gift you are, Peter.

And never mind journalling, just carry on with the words and music that bless so many. For a while my world looked bleak without you, and it inspired me to be more like you in grace and character. I pray for you often and will continue to pray. God bless you, Peter. It's thrilling to see you back in action. Much love.

MY Word, Susan! What a surprise. You are too kind. My sincere thanks to you and our TWG family; your prayers are much appreciated, and you've all been extremely generous and gracious.

So happy it arrived safely, Peter. I don't go to the post office as often so it was sitting around for a while. You are such a treasure, Peter. Much love in Christ.