Another White Stone by SUSAN HARRIS

The lights ablaze in our house should have alerted me. But Mosaic, the festival of cultures celebrated annually in Regina, flitted in my thoughts, and the Caribbean cuisine, which had been my sole enticement to the fair, lingered in my taste buds as I drove up the lane.

“Here’s baklava from the Greek pavilion for you,” I gushed to my husband. Excitedly I launched into an account of the colours, dance, music, and food as I removed my coat.

His responses were short. Happy to see me, yes, but distanced as if his heart was not in the trivialities that brought me such obvious joy.

“Is there anything else to bring in from the car?”

"No." I waved my hand, still immersed in the kaleidoscope of the international heritage.

“I found Baron’s body in the field.”

The anguish in the green eyes was undeniable in the brightly-lit kitchen. Two weeks earlier my husband had buried his first companion, his cat Straw whom he had introduced me to when we first dated. (This was my blog in May https://twgauthors.blogspot.com/2019/05/bye-straw-by-susan-harris.html)

Suddenly I couldn’t remember the pleasure of the curried chicken and roti of my Trinidadian roots that I had eaten at Mosaic. For all I could remember, it had tasted like the useless straw left after the harvest is reaped.

Dead Straw. Dead Baron. From a harvest of 116 felines over 11 years, a mere three remains.

My husband appeared to be waiting, as if he didn’t know how I would take the news. Daily I had gone out looking for my nine-month-old kitten Baron, a guest participant on my television series Eternity, playing the theme music of said program on my phone. One evening he and I had trudged in the rain, shrouded in winter coats, gloves, hats, and boots, and me in additional swishy pants that kids wear for the snow (which I had actually bought in the kids’ department and which I named Swishers.) It had been a cold, cold day on the prairies in spring.

My Trinidad accent tinged with “something Canadian” which neither Trinidadians nor Canadians recognize as theirs, echoed in the open space, a prayer to Heaven in the unending cloudy expanse above. A CNN report had identified the Trinidadian accent as number 11 out of 7000 for “sexiest accents”, but that knowledge was no consolation this night, not when I had to shout for lost cats.  (https://www.cnn.com/travel/article/sexy-accents/index.html)

The week before we had removed branches in our neighbour’s field as we scrounged for Baron, and prayed for the harvest as we walked. Finally the darkness swooped and we headed back empty-handed.

That Mosaic night I pretended I was fine as I bade my weary husband to have a shower while I informed the social network that they could cease praying for our kitten’s return. So many had responded to my call for prayer, many in The Word Guild.

But I was not fine. The love for a pet is a real, unconditional love. The pain is real.

A feral tom cat had taken up territory at our farm and had chased Baron out. The kitten had been scheduled to be neutered on May 22nd but had gone missing a few days before his appointment. Many prayed, and those prayers were answered for I had seen Baron running back to the farm during the second week. We intensified our search that week, but the feral chased him again, and either it or a coyote killed my kitten. (The day Straw died the feral was seen in the shed with her. He had also bitten off the tip of one of Smokey’s ears.)

Soft, gentle little pet. Baron’s soulful round blue eyes in his chocolate face were always alert. He was long haired, a Siamese crossed with a regular, long-haired breed which gave him the best of both strains and resulted in a beauty that surpassed the rest. My producer thought he looked like a little sheep.


And so we dug another grave. On June 2nd, I placed my size-6 feet into size-10, masculine, heavy-duty boots and stood patiently while my pants were sprayed with tick repellent. Then I drove to a little approach, where I followed my husband  on foot into a small clearing surrounded by trees, the place where he had buried Straw. Land that would never be disturbed! A haven for animals dead and alive. He used the deer path, which my untrained eyes could not readily see, but I trudged obediently if clumsily in the oversized boots, trusting, as I always trust him in the wild. My own boots were too fine for the terrain.

The whiff of death caught my nostrils, gushing tears with it. 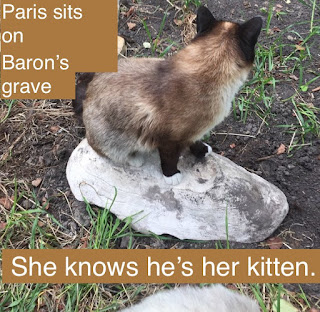 My phone was playing “In Moments Like These”. I aimed the camera at the bushy tail and white paw peeking out from the sweater he had taken off to wrap the remnants of the kitten in when he found him. Then an empty box—one that had held copies of my book Touched By Eternity when they arrived—was lowered in the hole with Baron inside. A fitting casket for the kitten of Eternity (referring not only to my television series, but to my belief that my pets will be in Heaven based on the testimony of others who have experienced near-deaths and my own interpretation of the Bible).

Baron was buried in the same spot he had sat after Straw was laid to rest, alongside her. He understood what had happened to her. As he had done two weeks earlier, my husband  laid a white stone on the spot.

Paris, the mother of Baron, sat on the stone and emitted the most guttural, abysmal sound of mourning such as we had never heard before. She, too, understood what had happened. Summer, the twin to Baron, crept near my billboard of Touched By Eternity in the equipment shed and lay there quietly. She also knew. So did a sombre Smokey.

How does one comfort grieving cats when one is allergic to cats like I am?

The years we’ve spent with animals have taught us how intelligent they are, how easily they communicate. We learn from them and we listen to them.

Two cats gone in two weeks. Two human hearts and three feline ones sorrow.  We pray for our pets’ comfort and our loss, and we make the memories count. Further, we pray that we will not count more than two white  stones for a long time.

Very touchingly told, Susan. The cat and animal lover in you shines. May you and your remaining kitties receive the comfort your heart craves. Maybe. . . Just maybe Baron may not have consciously suffered as much as you fear; that would be a mercy. ~~+~~

Thanks for your kinds words, Peter. I look at Baron's picture every day but it is the mother cat Paris that I crave the comfort for. She sits dejectedly with her head bent and her body limp, and hardly eats or hunts, and hunting was her favourite thing. Animals do experience depression. I believe you "prayer" for her and ours will help bring her joy again. I am allergic to cats else they would all be living at our house.

I tried to post a reply to last month's post to you but it was not published. Not sure why. Have a lovely day, Peter.

Hi Susan. Really cute. I viewed the video clip of Baron. He certainly knew how to ignore his human 'Mamma' - didn't he! (Smile) But maybe his cat mom, Paris, could get him to pay attention.
Oh yes, cats, dogs and no doubt other animals can exhibit signs of depression and mourning.

Sorry, I've no idea why your comment didn't show. I've had that happen to me on occasion, too. ~~+~~

Oh yes, Peter. Baron know he's cute enough to ignore the host and not be "fired" (grin). It's nuances like these that brings a smile to viewers. I have a few clips that I will use for future episodes of Eternity. I'm taking Paris to the vet tomorrow as she is not doing well. But ye, Paris sure know how to get attention with a certain tone/meow, hiss, or a good ol' smack. :-)

Peter, I think I figured out why the attempts to post comments do not go through. It's the proving one is not a robot. I don't see that on my phone but I see it on my computer. The failed comments were done on my phone.