Where goes the Comma? BY SUSAN HARRIS

There is no diminishing the power of floods, their waters savage and raging, merciless to anything in their paths. I’ve seen too many floods and their devastation in the countryside where I grew up. I saw flooding overtake towns and highways in Saskatchewan with the same results, and recently in 2014, my city went under a state of emergency as flood waters besieged it.

Years ago I was vacationing in California with my brother. He had recently read a book that expounded on Isaiah 59:19 and the placement of the comma, and we discussed the implication. Commas indeed change the meaning of sentences as the well known “Let’s eat Grandma.” v “Let’s eat, Grandma.” illustrates.

The KJV places the comma after the word flood – “When the enemy shall come in like a flood, the Spirit of the Lord shall lift up a standard against him.” This version renders the enemy as the subject that comes in like a flood.

The book my brother had read stated that in the original Hebrew, the comma was placed after “in”, rendering the reading as, “When the enemy shall come in, like a flood the Spirit of the Lord shall lift up a standard against him.” The emphasis here is that the Lord’s power comes in like a flood.

Our discussion was a healthy one which only served to reinforce how much our Lord wards off the torrents of the enemy against us. Since the Bible has placed the comma after the word flood I will use that as my default. My stance is that whether it’s the enemy or the Lord who swells like  a flood, the more crucial part of the verse is the promise that the LORD SHALL LIFT UP A STANDARD. I am solid in the fact that the devil’s power fades in light of God’s might, so no matter what force he comes with, the Lord will overpower him.

Whether one eats Grandma or not isn't a function of punctuation (but rather what impels one to cannibalism which is beyond the scope of this blog). In the same vein, where the comma goes in Isaiah 59:19 will never affect the power of the Lord who has already defeated the enemy of our souls.

Susan Harris is the author of eleven books. Her upcoming Christmas picture books are being released in October. www.susanharris.ca 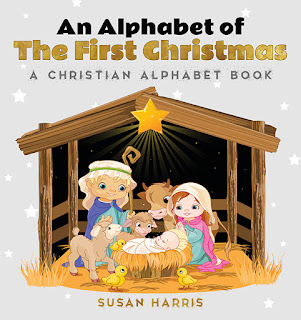 An Alphabet of the First Christmas: A Christian Alphabet Book explains why and how Christians celebrate Christmas. The story of Jesus’ birth is brought alive by using each letter of the alphabet to explain a different word relating to the biblical Christmas narrative. It includes a letter to your little one and a couple of lovely prayers. 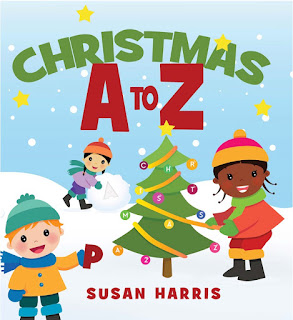 Christmas A to Z is a delightful book for little children. It gives a word which we associate with Christmas for each letter of the alphabet and explains it in a friendly and conversational way. Simply and gently written, little ones will find great enjoyment in the words and pictures of this book, thus gaining more knowledge of the many symbols of Christmas in our world.

Labels: a standard against the enemy, Birth of Jesus in pictures, Christian Alphabet, Christmas A to Z, Christmas kids, comma, juvenile literature, The power of the Lord

Thanks Susan. The comma placement in Isaiah 59:19 has been a point of debate for a long time. And whereas it is debatable, your providing a positive light by looking at both sides is much the line that I've also taken. Having the assurance that God and good wins out either way is cause for hope and rejoicing. ~~+~~

Nice to be in the company of a thought-provoker like you, Peter. Yes, we hope and rejoice.

Thanks for reading the post and leaving a comment, David. This is the sixth time I've tried to leave an acknowledgement and it just fails to be published. I really hope it goes through this time.