Today, my cat, Smokey, is a guest at a ladies meeting in Fort Qu’Appelle,  Saskatchewan. I am featured to share my books and since Smokey has been the inspiration for, and subject of, a few publications, he also received an invitation to the Christian Women’s Club.

In my June post, Messing Up Habitually,  I described my angst at leaving out Smokey
from my picture books, and my feeble attempts at redemption. Although he is immortalized on film on a CTV production (http://regina.ctvnews.ca/video?clipId=895655), it did not bring me the same level of satisfaction of having his photo in the books.

Shortly after writing the June 17 blog, I decided to publish another children’s book that had been in the pipeline since winter. (The idea for Christmas A to Z was inspired by the success of Alphabet on The Farm [Borealis press 2014] ). Then the brainwave hit - put Smokey’s photo in the Christmas book!

I was not going to miss another opportunity of featuring Smokey in print, no matter how far removed the subject might be. I refused to overthink the idea. This was the moment of redemption and there was no stopping me. All my creativity went into the how to fit Smokey in, not the “if he should be there”. And I became bolder. As to never regret the memories of the rest of the brood, I decided to include our entire furry family. Strawberry, Moka, Paris, Nice and Latte. Sadly, Latte is no longer with us at the time of this writing but she will live on in the book.

My daughter created a simple collage with the cats for the back cover of Christmas A to Z. I am convinced that many will enjoy seeing the cats on a Christmas tree if Smokey’s visits to the television studio, school, and ladies group are an indicator of interest in our feline family.

"Once is a mistake. Twice is a pattern. Three times is a habit. Eleven must be for redemption." concludes the June blog.

I'd say twelve is definitely redemption. 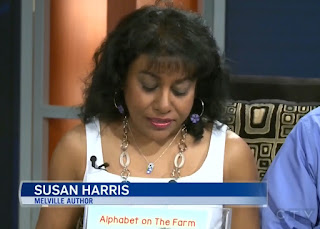 Susan Harris is the author of ten books. Her upcoming picture book, Christmas A to Z will be released in October. Stories about Smokey are featured in Chicken Soup for the Soul and in  10½ Sketches: Insights on Being Successful Right Where You Are. The story of how Smokey became a house pet and inspired Susan’s writings can be read in a free download of “How Not to Kidnap a Cat” at  http://www.amazon.com/dp/B00RNV3P10
Posted by Susan Harris at 8/17/2016 12:23:00 am

Labels: Alphabet on The Farm, Christmas A to Z, L'alphabet a la ferme, Smokey, Smokey & Susan on CTV, Smokey's Lockout in Chicken Soup for the Soul The Cat Did What? God is more than good, twelve is redemption

Susan, thanks for sharing your frets about your furry friends. A serious-fun post - From angst to action and omission to redemption.
Woe - ten books! Congratulations on your inspiring writing journey. ~~+~~

Redemption feels good, Peter. And an eleventh book is forthcoming also in October. Blessings on your writing as well.

Oh how sweet. But I would say that poor STRAW got short-changed on the naming hierarchy!. All those lovely names that roll off the tongue and then STRAW. Ex-barn cat, huh?

You made me giggle at your sympathy for the lowly Strawberry (that's her real name but it was too long to put on the photo hence Straw). I think Strawberry is a cute name, don't you? Actually she is the matriarch of the farm as all the others are her offspring in some form. Smokey is next in line for the rulership :-)