MESSING UP HABITUALLY by Susan Harris

The maxim drummed in my ear, a refrain that was indefensible. Over and over it revved in my brain, Once is a mistake. Twice is a pattern. Three times is a habit. And over and over I wondered why I never thought of it it until this week.

Why didn’t I include Smokey’s picture in my picture farm books? The last sentence of the last page of each book reads, “She got the idea for this book while playing with her kitten, Smokey, who was also born on the farm.” And below the line is a picture of my other picture book, Little Copper Pennies for Kids. Not of Smokey.
Once.

In the English edition of Alphabet on The Farm, K is for Kitten. Instead of the orange kitten, I could have used Smokey’s picture. Twice. 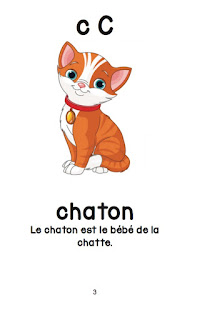 Search Quotes (dot com) was relentless. “You can’t make the same mistake twice. The second time you make it, it’s no longer a mistake, it’s a choice.  Deal with the consequences!”

That was in 2104. When the French edition, L'alphabet à la ferme, was released this year, the last sentence of the last page was the same, except in French.
Three times.

In the French edition, the letter C first featured Chevre (goat) but I immediately thought that a kitten should be there and so “C comme Chaton” replaced the Chevre and the little orange kitten smiled out of the page.
Four.

Wretched me. Why wasn’t the chaton Smokey?

English Stack (dot com) further conspired against me, ably using the second language to underscore my faux pas.  “In French, there is the expression "jamais deux sans trois" (literally: "never twice without a third [time]").”

Except I had eleven times to my credit if I considered the proofs. Oh la la! I did not  possess the stop-before-the-habit-is-formed gene so now I had to face the consequences. 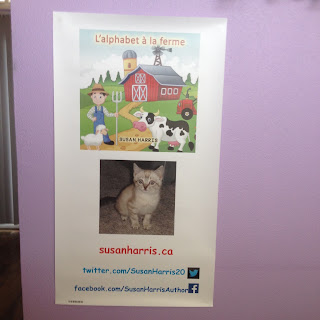 My feeble attempt to redeem my error to immortalize my cat in publishing is the fact that today, June 17, he is appearing on CTV at a local branch in Yorkton where I live. This video I intend to embed on YouTube.  Another endeavor is a poster ordered from Vistaprint which I will hang on a prominent wall in our house. On June 21 he will attend the book launch of L'alphabet à la ferme at St. Henry’s Elementary School in Melville, a French Immersion school. He has been invited to Christian Club’s ladies meeting in August and I will take him. 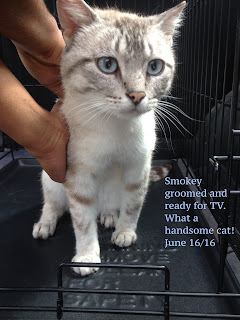 Smokey loves our garage and is staying there (and not in the house due to my allergies) for his star appearances.  A double car garage all to himself and who knows for how long.  Meanwhile, my  beloved CRV is parked in the open driveway, in thunderstorm and rain, at risk to hail. The lawn tractor had been ousted to the back yard, with the consolation of shelter of the cover of the barbecue grill that is too small for it. And the grill and tank gets wet and dry alternately.

Once is a mistake. Twice is a pattern. Three times is a habit. Eleven must be for redemption.

Susan Harris is the author of nine books. Stories about Smokey are featured in Chicken Soup for the Soul and in  10½ Sketches: Insights on Being Successful Right Where You Are . The story of how Smokey became a house pet and inspired Susan’s writings can be read in a free download of How Not to Kidnap a Cat at  http://www.amazon.com/dp/B00RNV3P10
Posted by Susan Harris at 6/17/2016 12:30:00 am

It was nice to make that mental link to my birthplace, Yorkton. I always have a few regrets with my books. There's always something you wish you had done a little differently.

It's interesting (and neat) that David is Yorktonian!
Susan, thanks for sharing your thought-provoking points, along with your characteristic hint of humour. You took me back to my childhood and my favourite kitty - a black and white sweetheart also called Smokey! ~~+~~

What fine connections...a Yortonian (nice word, Peter) who also has regrets and another much-loved Smokey kitty. Thanks Gentlemen. Blessed to be in such distinguished company.

Poor rejected Smokey! I am thinking, though, that Smokey is of the forgiving sort. Sweet story, Susan. Maybe a photograph wouldn't have worked as well in your book, though. The cartoon character chaton is pretty cute! But then again, so is Smokey!

Smokey is such a hit with the children that he would have fitted well in the book, Glynis. I decided to include him in my upcoming Christmas books. That story was meant to be my blog article for July but Internet connections prevented a post so it will now be in August. Thank you for your encouragement.