The Collection and a Biker Part 1 SUSAN HARRIS

For Peter Black - one of the best people I know. Here is the first part of the chapter. (The second part was in the July blog.)

The Collection and a Biker Part 1

Ruth trilled the little chorus she had sung in Sunday School nearly three decades ago. Soon after logging on to Facebook she exclaimed in surprise, "The penny is going to be eliminated!" Her rising voice made it appear more of a question. Clicking on the link, the brunette read the article's headline: Mint will stop making pennies this fall. She was quiet as she absorbed the news, the look on her face one of shock. Her dark curls hung around her head in soft coils as she gazed at the computer screen.

Quickly she messaged back, stating her response aloud as she typed. "Many learnt of missions through the penny. Sad to see it go for that reason." Her white, French-tipped fingernails clicked on the keyboard as she pressed the letters.

Walking to the microwave where two pennies lay, the thirty-two-year-old woman picked one up and blew off the dust. It was Copper, and its year said 1959.

"Missions," she repeated to herself. Copper knew exactly what she meant.

Having been placed in many offering collections over the years, Copper had been counted, rolled, and sent to the bank with other pennies. Innumerable times. Then the little coin was given back to other customers. Over and over the cycle was repeated. As it changed hands through trade, Copper saw many places, partook in events, and was privy to conversations that could melt ice.

Ruth's little song was an old one. Years ago, children used to sing the catchy tune, Dropping Pennies,when they were putting offering into the bag, and adults used to join in with deeper voices. Come to think of it, neither Ruth nor Copper had heard the song lately.

The jingle of coins bouncing against each other was a glorious sound that never failed to bring smiles to the children's little faces. At one church, a medium-aged, dimple-cheeked boy named Darren used to snap his pennies into the burgundy collection bag so it could produce the loudest sound. Some children would giggle, and others seemed to burn the action in memory as if to try it out. Still others looked scared as adults frowned at them to be silent. Copper did not mind being snapped for entertainment.

At another church, flat white boxes shaped like drums, with red lettering and crosses, were given to each child. Once the box was assembled, a slot at the top allowed the pennies to be dropped inside. The mandate: Save your pennies and bring them to help the poor. That class was buying a goat for an orphanage in Africa.

There were many Sunday School teachers, but Ruth remembered one lady with a lovely smile and a yellow dress. With long, golden hair parted on the side, she looked like the angel figurine in the foyer of the church. This teacher told the children the most remarkable story of a little coin's value. It was about a widow who put two small copper coins in the offering. That day Jesus was sitting in the temple near the treasury, the place where the people placed their offering.

The angel lady had talked about a mixed crowd at the temple. The rich ones dressed in fancy clothes made of expensive fabrics were putting in lots of money. Then a woman, not well dressed at all because she was terribly poor and had very little money, came and dropped in two copper coins. The teacher related that Jesus called his disciples and showed them the woman.

"This widow has given more than anyone else here today," Jesus told them, and they looked at him as if to say "Yeah, right!" Then Jesus explained, "The others gave money but still had lots remaining. This woman gave all the money she owned."

The blonde Sunday School teacher had smiled and said that small sacrifices of poor people meant more to God than the lavish donations of the wealthy. The little coins like Copper proved a point, that the heart of the giver is more important than the size of their gift.

Copper felt like a hero. It was proud to be a one-cent piece. It was a truly good feeling to know that a copper coin was in the Bible, and was used to inspire people right up to the present. Talk about penny power! Collecting pennies has never gone out of fashion. Penny drives are not unique to churches, as a lot of schools fundraise with them, as do clubs, communities, and just about anyone wanting to make a difference in the lives of the less fortunate. 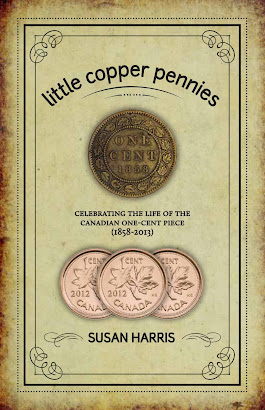 Susan, I read this episode in Copper's journey a while back and then was away from home and the Internet for a few days, but now I realize I hadn't commented on it.
Still, here goes: In memory I too, can hear the chink and jingle of pennies dropping in a Sunday School missionary offering box in concert with the singing of that delightful children's missionary offering song you mention - "Hear the pennies dropping; Listen while they fall . . . " We sang it in the '50s in Glasgow and then later after our move to Aberdeen. And then, in our earlier days in Canada in the '70s. Haven't heard it lately, though.

Thanks for the memory tweak and stirring good ol' nostalgia. ~~+~~

Hi Peter, this blog is actually the first part of the chapter which elaborates on the Dropping Pennies song. The post in July was from the same chapter but the second part. I did it in reverse order. As always, Peter, I appreciate you reading the blogs, and lately I've kept at it because of you. Here's hoping you enjoy next story. Cheers.