Programmed For Purpose by SUSAN HARRIS 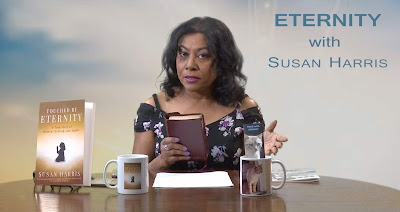 The Most High God wrote your program and He coded you with His DNA. He not only coded you for Earth and solar systems and night and day, He programmed you for Eternity.

He chose us in Him before the foundations of the world (Ephesians 5:2.) When He laid out the plan for your life, He coded everything you would need for what you will encounter in this life – the sicknesses, the temptations, the despair, the burdens,  all the tribulations. God took into account every injustice, every loss, every mistake, every longing, and He coded you strong enough, made your resistance deep enough. He programmed in you persistence, courage, faith and the ability, the endurance, that no matter what comes against you it will not be too much to bear.

Borrowing some terms from the television show Survivor, you've been coded to outwit the enemy, to outplay the confusion, and to outlast the hardships until the answer comes to pass.

In 2017 it was announced that Canada’s national building codes will be changing to adapt to the effects of climate change. The National Research Council (NRC), which sets “model codes” for building, energy, plumbing and fire began updating the codes to reflect the fact that Canada is seeing heavier rain, floods, high winds, snow, ice, temperature swings, and all-around extreme weather.
Tornadoes and winds—we are so familiar with them. And carrying that analogy into our lives - God wouldn't be just if He knew we were going to face tornado winds of 100km/h but only coded us for 50km/h.  No, that wouldn’t pass.

Isaiah 55:9 tells us of God’s standards, “For as the heavens are higher than the earth, So are My ways higher than your ways and My thoughts than your thoughts.”

Now the key is friend – DO NOT TO LOSE THE BATTLE IN YOUR  MIND.

Your mind will tell you that you’re coded for 75 km/h tornado winds when in fact the National Research Council has upgraded it. Your mind will say: it’s never going to happen. You’ll never get well; there’ll never be justice; you’ll fail anyway so why bother to try?

And I might believe it if my programmer was reliant on coffee. I might be convinced that my programmer could make a mistake if he was educated at university. But I want to remind you that your programmer is Almighty God. He spoke the heaven and the earth into existence. His code is error-proof. He cannot make mistakes. And He has provided a guard for your mind to keep it in line with His code – He has the helmet of salvation (Ephesians 6:17). It will deflect the thoughts of the enemy from entering your mind…

Earlier this year I was at the U of S campus in Saskatoon. It was my first time visiting the campus and I was thrilled to see the buildings in which our people are educated. Then a friend mentioned that there are underground pedestrian tunnels that connect the  buildings so students could get by easily when there is snow packed on the top.

Similarly God has put things in you that you cannot see. You have been equipped with tunnels to get you through the blizzards of life. I am here to tell you that I have experiences which I did not always understand. But now I know and I can tell you that deep in your souls there is something more than gold that is being processed and refined through that crushing you are going through. Diamonds are produced by heat and pressure deep within the earth. The process is not in vain. It always, always brings out something priceless.

Maybe you have been walking on the surface of the U of S campus so to speak, and it was good for that time. But you have structures to take you deeper like the tunnels, to bring you out warm and dry. You have foundations to sustain you in this test. You have codes and programs to get you where you need to go.

But as you take the new land there will new hindrances. The greater the outcome, the greater the warfare. Whatever is confronting you, I encourage you to remember that you are programed to conquer. Not particularly because you're super, but because your programmer, Almighty God is. And He has coded you with everything that you need.

Now, I believe that the mind of Christ is in you, and strength and hope is rising up as you hear God’s word. You will circumvent every storm, outwit every onslaught of the enemy, and overcome every battle in the conquering name of Jesus name because you have been Programmed for Purpose.

Susan Harris is the host of ETERNITY on Access7 cable television in eastern SK. This blog is an excerpt from her message on Sep 15, 2019, "Programmed For Purpose". Find snippets, excepts and  episodes on her YouTube channel at https://www.youtube.com/channel/UCB30i05nvacFIJ1ciaQ0ClA

Well, Susan, this message sure packs a punch of positivity and purpose, well analogized and Scripturally-founded! A stirring, stimulating and encouraging read. Thank you. ~~+~~

Thank you, Peter. I encourage myself while I encourage my viewers, and I pray to make a difference in their lives. I trust that it lifted you too. I speak God's promises over my life just as I've written in the blog. However, the message for TV was 19 minutes long.

Someone asked me to speak on a particular topic o I'm very excited to do that in an upcoming show.

Have a wonderful week, Peter. Until next month :-).