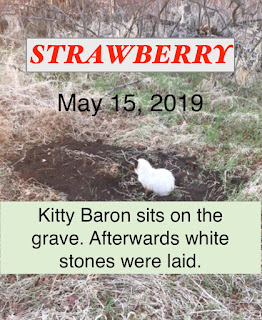 From idyllic island to metropolitan cities to rural farm. From squishing sand with my toes, to squeezing them into pumps, to skirting squelchy mud in boots. Oceans blue tipped with foamy white. Streets buzzing with lights and life. Expanses of serene space.
And barn cats. We’ve had 116 over 11 years. Their numbers shrank even as our bonding grew. Tears falling over the meal for a fattened fox. For the babies that die.
"They're only barn cats." The neighbour was patient with my blubbering. "Good for catching mice but multiplying too fast."
She meant well. The "good for catching mice but multiplying too fast" is but a pendulum that swings too quickly, blurring the useful with the burdensome. They catch the mice that eat the grain and gnaw the boxes and nibble rubber hoses in the equipment. The poop we won’t go into.
The tears fall again. For the matriarch whom we buried last night.
Strawberry. The beautiful name I picked for the homely stray with the two kittens my brother-in-law had found.
“Every farm needs a cat,” was his simple explanation.
Straw she morphed into, the abbreviation a fit for the lowly fields she roamed. And then it was Traw.
Traw – outsmarted the beasts that devoured the rest.
Traw – from morning to night alongside her master while he broke virgin land, sharing lunch and water. A lone man and a lone cat.
Whitey the kitten had “put on her sunhat, slung a beach bag over her shoulder, and waved goodbye” is how he described it to me. Silver, the other kitten had become a mom herself and was changing diapers. It was just him and Straw.
As he had cared for me he tenderly attended to Traw. Over the last two years she lay in front of the fire or heater and he petted her head. It was all she wanted. 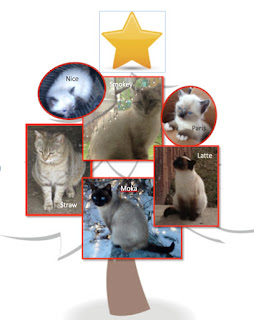 When the vet returned my call yesterday all I had was two words. “She died”. Just as he had told me.
As it was in the beginning so too it was at the end. A man alone with his first companion as she breathed her last. A holy moment that was meant to be (as allergies prevented me from prolonged contact with Traw.)
I blubber and weep and write. A death as grievous as if it were human. Our four remaining cats understood the loss, and gathered at the sound of shovel meeting dirt. Baron paid his last respects by curling up on the site. Afterwards the man laid white stones on the dark earth.
In Genesis 1:24 God said, “Let the earth bring forth living creatures after their kind” (NASB).
It always goes back to the beginning. The One who carries us as we will ourselves to carry on.
In 1991 my parrot had died just hours before I delivered the valedictory address at graduation in Biblical Theology on the idyllic island of Trinidad. I blubbered and sobbed up to minutes before the ceremony. Few knew why I was as sad as I was but I delivered the speech well. On Sunday I have to deliver the sermon at Melville Pentecostal Church on a prairie city, and I know it will also be well.

"I'm sorry for your loss" . . . The phrase sounds hollow and trite; however, I am sorry for your loss. You're evidently a pet lover, Susan - especially of the cats in your life.
Eleven years - that's almost senior in cat-life terms.
Your outpouring has a poetic feel, like an elegy, and makes for interesting and enjoyable reading, despite your personal sadness. ~~+~~